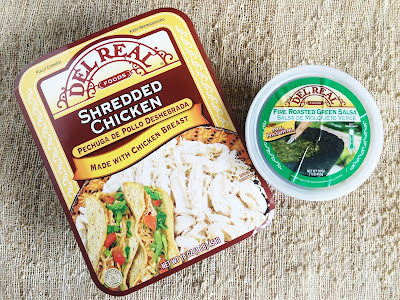 Don't let the short list of ingredients and super easy instructions fool you. This salad is loaded with Southwest flavor and is perfect for all those summer picnics and BBQ's coming up! When you don't want to heat up the kitchen this is the perfect thing to serve. My family gobbled this up and it was so easy to throw together before we ran out the door for baseball practice. If you want to make it even easier on yourself, the croutons and dressing can be made ahead of time as well. Leftovers (if there are any) would be awesome thrown in a tortilla and eaten as a wrap the next day! 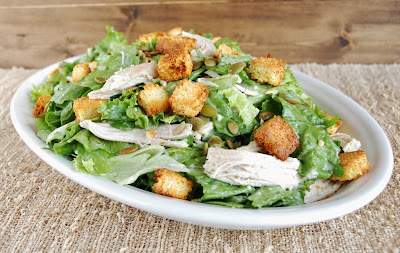 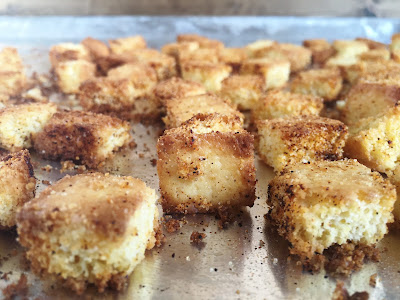 Pre-heat oven to 375 degrees.
Stir the cumin, garlic powder, chili powder and creole seasoning together in a small bowl.
Place the cornbread cubes on a foil lined cookie sheet, spray generously with non-stick cooking spray and sprinkle with the seasoning mix. Place in the oven and bake for about 15 minutes, or until cubes are browned and crisp.
While the croutons are toasting, prepare the chicken according to package directions. Drain the chicken and set aside to cool.
In a small bowl, stir together the Caesar dressing and Salsa Verde.
In a large serving bowl, toss together the salad greens, chicken and the salad dressing. Top with croutons, sprinkle with pepitas and serve immediately.

Del Real is also is awarding a ‘Top Voted Recipe’ prize. The voting page is now active and individuals may vote for one recipe, per day and must have a Facebook account in order for the vote to validate. If you'd like to take a moment and help me win the title of "Top Voted" I'd be so appreciative! Here's the LINK

Yum
The lovely people at Del Real are hosting a blogger recipe contest and I have had a ton of fun coming up with entries using their delicious products. It's no secret that I could eat Tex-Mex on repeat and never get sick of it, so as soon as I saw this contest I was in! My first entry is a mash up of a few easy family favorites that my kids love. 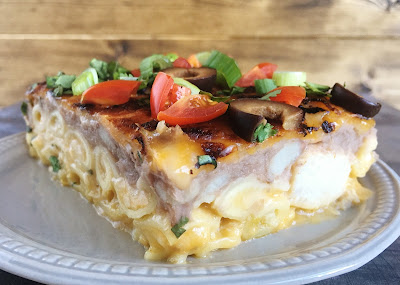 Mac and Cheese and Tex-Mex Seven Layer Dip had a baby and it is my Del Real Seven Layer Mexi-Mac. Super quick and easy to throw together thanks to Del Real's Chicken Chile Verde and Frijoles Refritos, this dish will be ready in 25 minutes! I used small shell pasta in this because that's what my kids picked, but feel free to use any small shaped pasta you have. 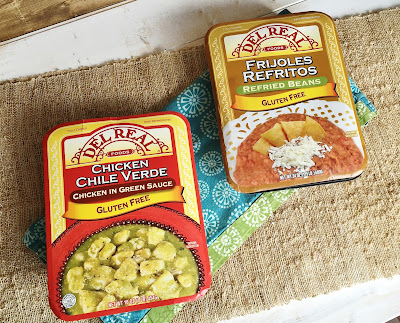 Pre-heat broiler to high.
Bring a large pot of water up to a boil over high heat.
Once the water is boiling, add the salt and pasta. Cook according to package directions until tender and drain.
While the pasta is cooking, cook the Chicken Chile Verde and Frijoles Refritos according to package directions.
Add the drained pasta back to the pot you boiled them in and add the Chicken Chile Verde, 4 cups of the cheese and the sour cream. Stir until the pasta is well coated and pour the mixture into a 9x13 inch baking dish that’s been sprayed with non-stick cooking spray.
Spread the Frijoles Refritos evenly over the top of the pasta mixture and sprinkle the remaining 2 cups of cheese over that. Place under the broiler and, watching closely to prevent burning, broil until cheese is melted. About 2-3 minutes.
Sprinkle the dish evenly with diced tomatoes, green onion, black olives and cilantro. Serve immediately.
Serves 8
total time: 25 minutes 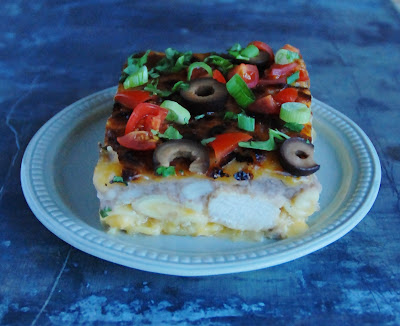 Del Real is also is awarding a ‘Top Voted Recipe’ prize. The voting page is now active and individuals may vote for one recipe, per day and must have a Facebook account in order for the vote to validate. If you'd like to take a moment and help me win the title of "Top Voted" I'd be so appreciative! Here's the LINK 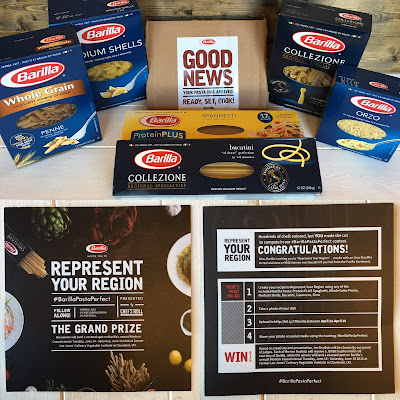 I am so excited and a little shocked that I was recently accepted to compete in Barilla's Represent Your Region Contest! Competitors were sent an assortment of Barilla pastas and challenged to create a dish inspired by their region. As I brainstormed what to make to represent Texas the best, I was overwhelmed with the list of ideas I had. I managed to edit it down and I am really excited with what I came up with!
I made a Tex-Mex braised beef brisket sauce loaded with chiles, smoked salt and Shiner Bock beer and tossed that with Barilla's bucatini pasta. Drizzled on top is my Tex-Mex spin on a pesto with cilantro, lime and pepitas. The crowning glory is my "Mini Rellenos" - roasted jalapenos stuffed with cheese and fried just like their tex mex big brother Chiles Rellenos!
The grand prize for this contest is an all expense paid Culinary Weekend experience at Barilla’s annual Modern Casual retreat at Farmer Lee Jones'Culinary Vegetable Institute in Cleveland, OH!!! There's also a people's choice award up for grabs, so if you can, hop on over HERE and give my recipe a vote! 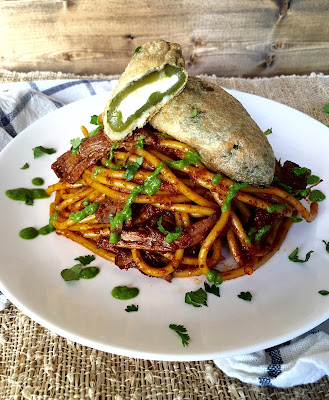 Place chiles in a medium bowl. Pour the boiling water over them and place a small glass plate on top to weigh them down. Soak until chiles soften, at least 30 minutes.
Place chiles in blender along with the soaking liquid, chili powder, garlic, cumin seeds, oregano, coriander, smoked salt and tomatoes; blend until smooth.

Pat beef dry, remove excess fat and cut into 3 inch cubes. Sprinkle with kosher salt. Melt the butter and oil over high heat in a large heavy based pot. Working in batches, add brisket and sear on all sides until browned, then remove to a plate and set aside. Turn heat down to medium low and add the chopped onion and poblano. Sauté for 5 minutes, or until the vegetables have softened. Add the beer, brisket (add the juices too) and the chile puree.

Bring the mixture to a simmer. Cover and place in oven for 2 hours. Uncover and continue to cook about 1 hour longer or until the beef is tender enough to pull apart with forks and the liquid has reduced to be a thick sauce.

While the brisket is cooking, place the cilantro, lime juice, garlic, jalapeno, olive oil, pepitas and salt in a small food processor and blend until smooth.  Pour mixture into a squirt bottle for later use.

Remove the brisket from the sauce onto a large sheet tray. Skim off any fat from surface of sauce and shred the brisket coarsely with two forks, discarding any remaining fat. Return the shredded meat to the sauce, cover the pot and set aside until ready to serve.

Place the jalapenos over a gas flame or underneath the broiler and char until they are blackened on all sides. Place them in a bowl, cover tightly with plastic wrap and let stand for 10 minutes. Peel the charred skin off and carefully make a small slit one side of the pepper. Fill the peppers with the cheese and secure with a toothpick. In a large heavy-bottomed saucepan, pour in oil and heat over medium-high heat until the oil reaches 375 degrees. Beat the egg whites in a medium mixing bowl until soft peaks form. Add the egg yolk and continue to beat until combined. Dredge the filled peppers in flour, shake off any excess, then dip the into the egg mixture. Fry until golden brown, about 3-5 minutes and drain on a cooling rack placed on a cookie sheet.

Bring a very large pot of water up to a boil over high heat. Add 1 Tablespoon of salt and add pasta and cook until al dente, about 7 minutes.

To serve, place a serving of pasta in a large bowl, drizzle with the cilantro vinaigrette and top with mini rellenos. Serve immediately, makes 6 servings.
at April 14, 2016 No comments:

This is my entry for the Bake it With Rodelle Contest!
The contest invited bakers to share their take on the delicious recipe they posted for

Lemon Vanilla Poppy Seed 2-Bite Scones and below is my take on their creation.

One winner will receive a Rodelle prize pack filled with gourmet baking supplies, the best vanilla on the market, and international spice blends. The chosen winner will also receive a 12" Convection Digital Countertop Oven and aArtisan® Series 5-Quart Tilt-Head Stand Mixer - both in beautiful Cobalt Blue! 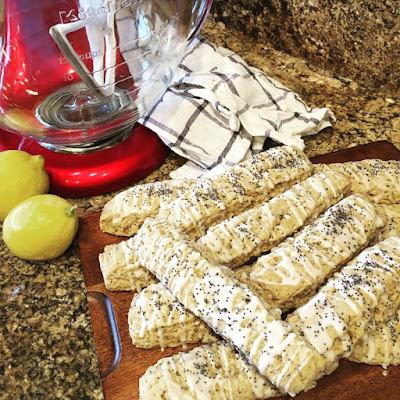 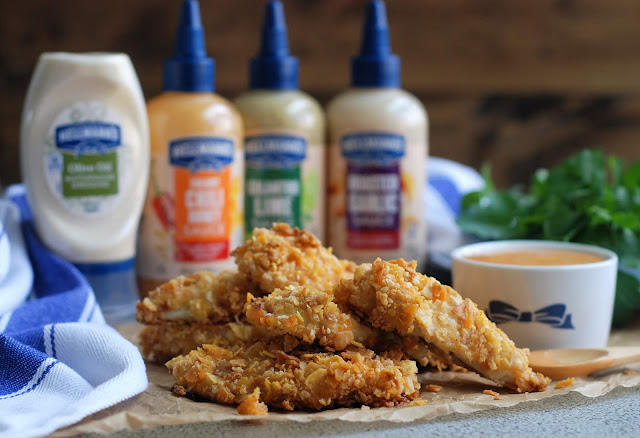