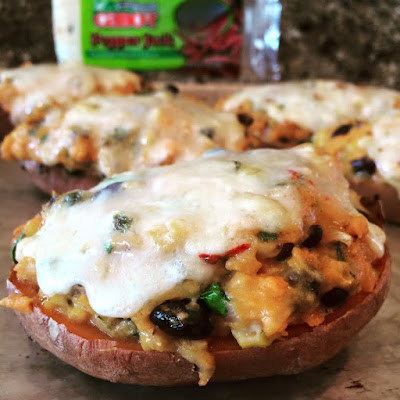 Last night was one of those times where the fridge was bare and I had to make magic with the random items I had left in the fridge and pantry. I had 4 sweet potatoes, 2 ears of corn and a few random cheeses.
I wasn't sure if they would notice that it was a meatless meal, but no one did and I got clean plates and two thumbs up all around. I served it with this Mexican Quinoa- sorta like Mexican rice but using quinoa instead and the changes I made to the recipe were: using salsa instead of chopped tomatoes, ancho chile powder instead of chipotle, added some roasted corn kernels and I topped it with cilantro and green onion. Luckily, my family loved these and I had several requests for the recipe so here it goes!
Southwest Stuffed Sweet Potato Skins
4 small/ medium sweet potatoes
2 ears of corn
1 can black beans, rinsed and drained
1 tablespoon butter
½ onion, chopped
1/4 cup light cream cheese and herb spread
¼ cup light sour cream (you could use greek yogurt too)
1 teaspoon salt (+ more to taste)
1 tablespoon pampered chef tex-mex rub (you could sub taco seasoning)
½ cup cilantro, roughly chopped
1 cup shredded cheddar-jack cheese
1 cup shredded Pepperjack cheese


Preheat oven to 350 degrees. Bake the sweet potatoes for 45-60 minutes.
Remove sweet potatoes from the oven when fork-tender. Let cool for 5-10 minutes. Cut the sweet potatoes in half. Scrape the flesh of the sweet potatoes out and place in a mixing bowl, leaving a thin layer of potato inside of the skins. Mash the sweet potato until almost completely smooth.
While sweet potatoes are baking, cut the kernels off the cobs and place it in a heavy cast-iron skillet over medium-high heat with no butter or oil. Sprinkle with salt and other Mexican seasoning (as much as you want). Do not stir! Let corn roast for several minutes before stirring. Let it roast for a few more minutes before stirring again. Continue this for about 10 minutes, until corn is browned and roasted on the outside. Pour the roasted corn in the bowl with the mashed sweet potato.
In the same skillet you roasted the corn in, sauté the onion in the butter over medium heat until soft and translucent. Pour the onions into the mixing bowl with the sweet potato mixture.
Stir the black beans, cream cheese spread, sour cream, salt, seasoning mix, cilantro and cheddar jack cheese. Mix well and then TASTE IT. Add more seasoning if needed and taste it again. Once you like the filling, scoop it into the skins and top each with the pepperjack cheese.
Broil for about 5 minutes or until cheese is melted.
If I wasn't making this for my kids, I would have added some pickled jalapenos to the mix, but that would have been too spicy for them. These would be great topped with guacamole too! 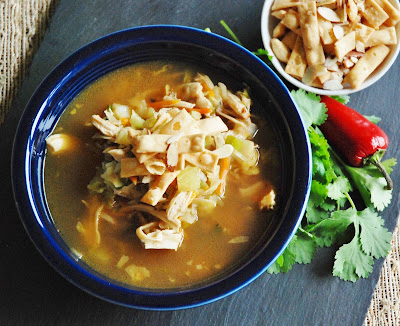 Yum
As simple as this meal looks and as easy as it is to throw together it is a complete show stopper. It looks totally unassuming and simplistic.
Chicken tenders and mashed sweet potatoes; right?
Wrong. 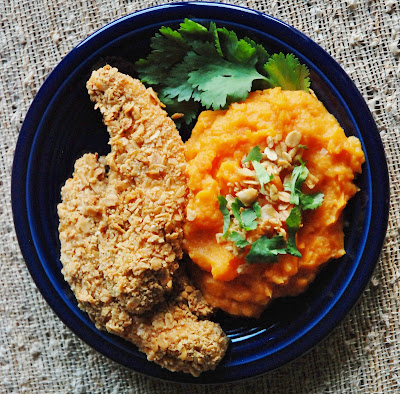 Red curry Thai chicken fingers coated in toasty coconut granola served with coconut milk mashed sweet potatoes. Those silky creamy sweet potatoes are topped with more of the crunchy granola which reminds me a little of sweet potato casserole minus the sickeningly sweet sugar and marshmallows that typically ruin Thanksgiving sweet potatoes for me.
The flavors are bold, unexpected and earned two thumbs up from everyone at the table!
I just love when that happens. 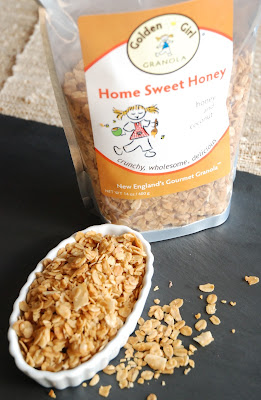 When I first saw that Golden Girl Granola was hosting a recipe contest it was a no brainer for me to sign up. I brainstormed, settled on what I was going to make, went to the store for all of my ingredients......and then saw on twitter another contestant had made almost the exact same dish I was planning on making.
Game over. Or so I thought. 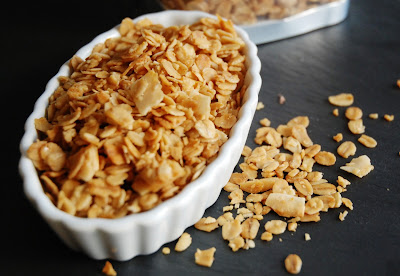 Now I'm happier than ever that I did go to plan B because this is even better than my first idea!
When I saw the selection of granolas to choose from, the Home Sweet Honey flavor really stood out to me. I really enjoy taking sweet and savory combos to the next level and that is exactly what I did.
The first thing I noticed when tasting this granola is how toasty it is- it smells like freshly toasted oats, coconut and honey. Why isn't there a candle that smells like that yet? 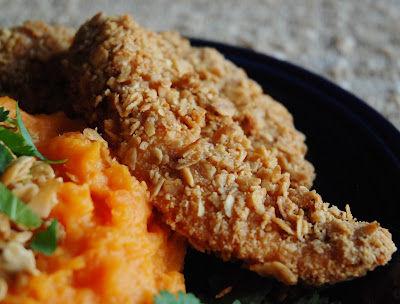 Pre-heat oven to 375 degrees.
Place the cubed sweet potatoes in a large pot and cover with cold water by 1 inch. Bring to a boil over medium high heat. Once the water is boiling, add 1/2 teaspoon of the salt. Boil the sweet potatoes until tender, about 10 minutes.
While the sweet potatoes are cooking, place the granola in a small food processor. Pulse 8-10 times until the granola is the consistency of breadcrumbs (a few larger pieces are ok, but the majority should be fine). Pour the crumbs into a pie plate.
Season the chicken tenders with 1/2 teaspoon of the salt and then brush them evenly with the red Thai curry paste. Coat the chicken in the crumbs, pressing to help it adhere. Lay the coated chicken tenders on a parchment lined cookie sheet and spray liberally with non-stick cooking spray. Bake for 12-15 minutes, or until chicken is crisp and browned.
While the chicken is baking and once the sweet potatoes are tender, drain them, add them back to the hot pan and mash them until smooth. Add the coconut milk and remaining 1 teaspoon of salt and stir until smooth.
Top each serving of sweet potatoes with granola and cilantro.
Serve immediately.
Serves 4 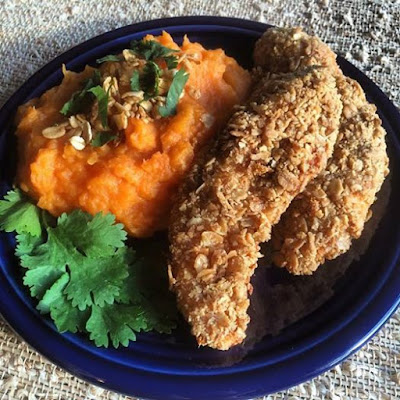 Little's Lunches 23 and the Giveaway Winner!

Yum
Happy Monday! I hope y'all had a great weekend!
Here's what was in our lunchboxes this week: 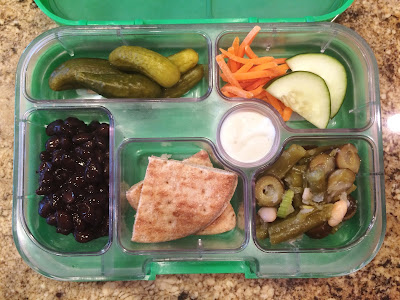 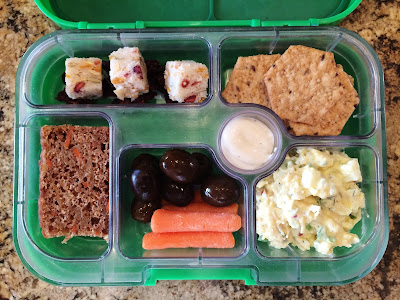 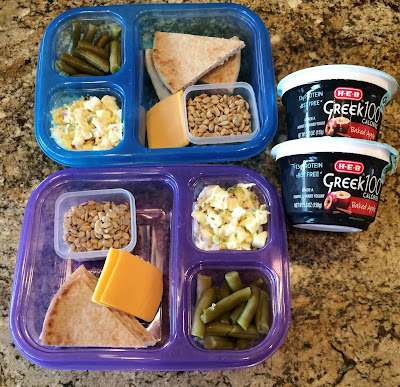 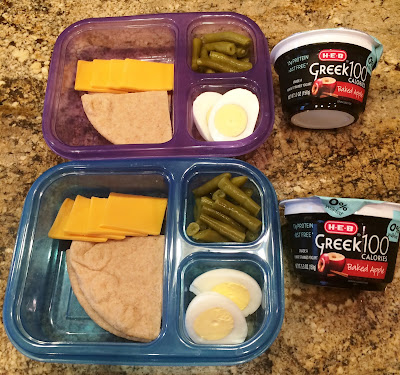 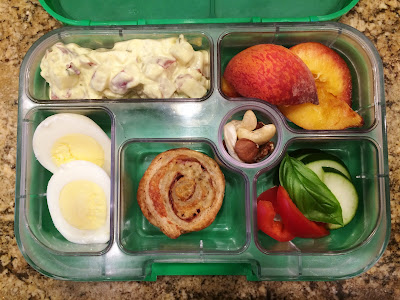 Friday: Hard boiled egg, Mini-letta Swirls, cucumbers and red bell peppers with basil (right now, M is obsessed with basil and is literally putting it on everything), peaches, mixed nuts and chicken salad

And now for the giveaway!! Thanks so much to everyone that entered!
The winner is Michelle Kusma!! Congratulations! 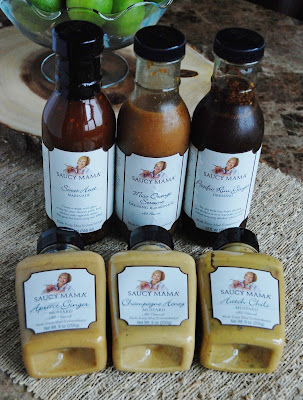 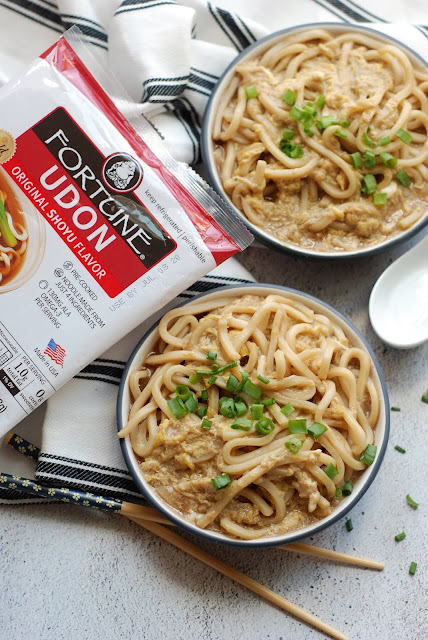